Street Art for Good: The story behind Withington Walls 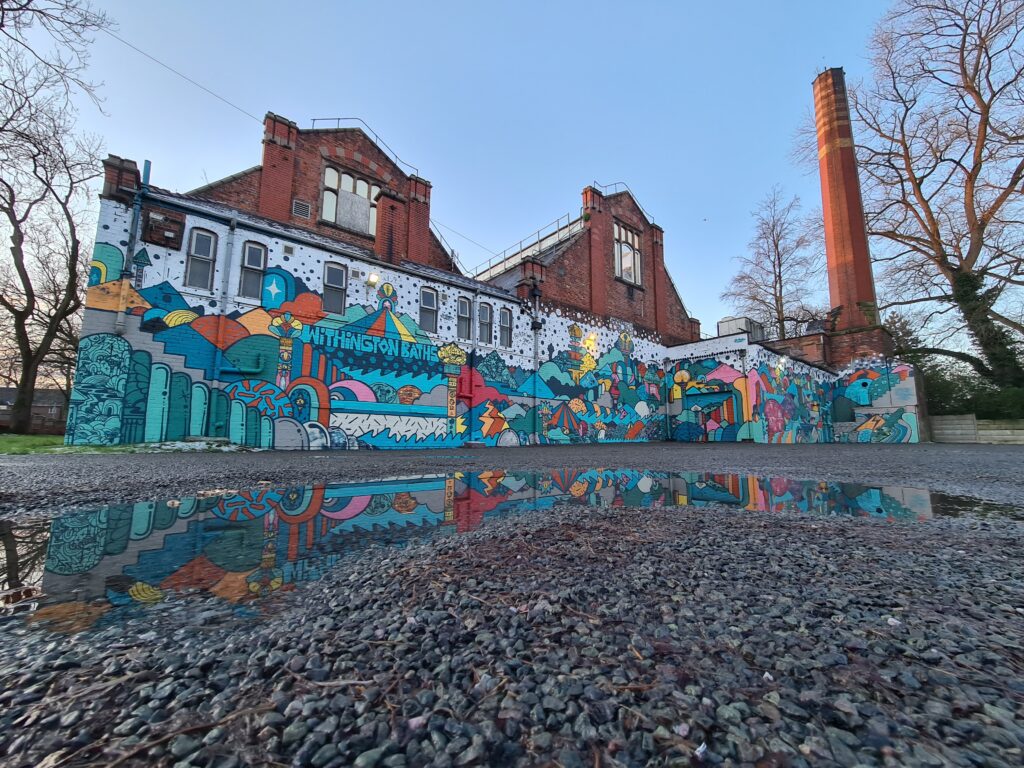 Everyone who lives in a city knows the feeling of walking through town and seeing nothing but shutters and brick.

It’s boring at best, and downright depressing at worst – but one man has set out to change that, with the help of local graffiti artists.

Ed Wellard set out with one goal – to transform the way people see Withington. Just a few years ago he set up Withington Walls, a community street art project intending to turn Withington into the place he knew it could be: bright, vibrant, and good for everyone.

Based in a suburb of Greater Manchester in the North of England, Withington Walls is a charity that strives to clean up and improve its hometown. Full of red brick and shuttered shops, Ed wasn’t the first to notice that Withington needed a little brightening up, but he was the first to truly make a difference.

Initially funded by a pot of £5,000, raised through a Crowdfunder appeal and the generous donations of Withington residents, Withington Walls finally took off.

“In the summer of 2020, when we started being able to do stuff again, we got out and started seeing what we could do with that initial pot of cash,” explains Ed, who now runs the charity as a one-man band. “And it’s just kind of grown up organically from there.”

Now with pieces of art installed all over Withington, Withington Walls has truly become part of the DNA of the city, softening the industrial nature of years ago and even encouraging people to move into the area.

“I love it that I know … people are moving to the area or visiting the area, or starting businesses in the area, because it’s gotten a more positive vibe as a result of the street art,” says Ed. “There’s been a few businesses [that] definitely said that was part of the reason they decided to invest in Withington, it was because they were aware of Withington [Walls] and the street art project.”

Though there are a few naysayers, as there often are with graffiti-style art, ultimately the people of Withington have been enamoured by the art which has taken over their suburb.

“Overwhelmingly, it’s positive. It’s lovely when you’re out there,” says Ed of the public response. “Whether that’s actually doing some artwork or the tiresome parts, you get somebody thanking you or asking you to do their shutter too.

“There was the idea that we could create kind of a sense of character, through street art in Withington, that … we [could] make it a more vibrant or colourful place,” says Ed. “And that we could give it a sense of identity through this history. So it’s just kind of local people wanting something good to happen where they lived.”

One of Withington Wall’s most well known pieces is the Marcus Rashford mural that was created by artist Akse P19.

The five metre by 15 metre mural shows an image of Marcus, in black and white, and was painted in recognition of the work he did during the COVID-19 pandemic to tackle child poverty. The mural includes the quote ‘take pride in knowing that your struggle will play the biggest role in your purpose’, taken from a letter published as part of a campaign with Marcus and Burberry to fund youth centres.

“It’s become such a symbol of the project,” says Ed, of the Marcus Rashford mural, which became popular across the world when it was unveiled. “And it’s what’s made us known, hilariously, globally, when that wasn’t really what we set out to achieve. That really was just something that we were doing for local people, because it was a bit of local pride.”

Despite the global popularity that came with the Marcus Rashford mural, ultimately, Ed and Withington Walls are focused on their community at home.

“We want Withington to be a brighter, better place … we want it to be a nicer place to live,” says Ed. “We want it somewhere to be somewhere that people are proud of to be from.”

This article aligns with the UN SDG Sustainable Cities and Communities.